Aina is Barcelona’s Language Exchange founder and a Spanish teacher. She’s originally from Barcelona, ​​but she has lived in other countries such as Italy, Norway, Barbados and Saint Martin, where she learned several languages.
When she returned to Barcelona she wanted to maintain her level of English, Italian and Norwegian so she sought out language exchanges that met her needs and fit her schedule. After searching and searching, she could not find one that suited, so she decided to start her own. 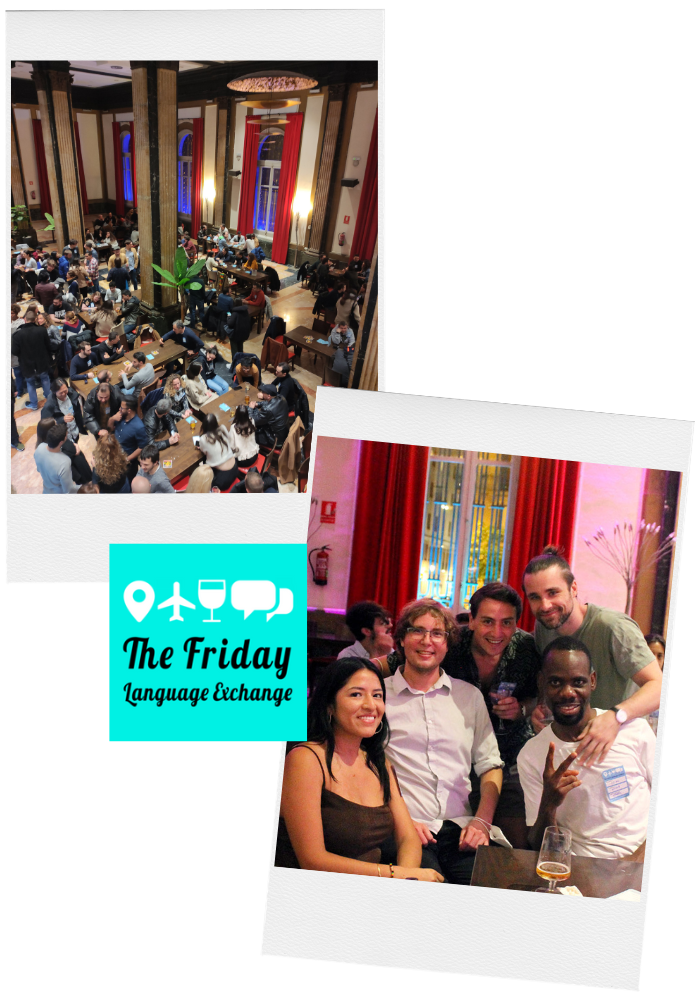 Was born on Friday, October 3rd, 2014, when 5 people of different nationalities met in a small bar in the Gothic Quarter of Barcelona to chat in English and Spanish, and to have a few drinks. The following week a group of 20 people met together. Since then the event has continued to grow week after week. On a few occasions more than 350 people have attended! As the language exchange continued to grow it moved to larger venues, but remained faithful to frequency and values. Currently you can practice any language of which there’re native speakers, the most practiced ones are: Spanish, English, German, French, Italian, Portuguese, Catalan, Chinese and Russian.

The amazing feedback of The Friday Language Exchange and by requests of many attendees, led to the creation of a second event. Same concept and characteristics, but on a different day of the week. Thus, The Thursday Language Exchange was born on Thursday, November 10th, 2016, two years after the first language exchange organized by Aina.

A year later, on September 27, 2017, it started The Wednesday Language Exchange, and it has established itself as one of the preferred language exchanges in the city, with an average of 90 attendees every week.

ALL OF THE EVENTS ARE FREE AND TAKE PLACE WEEKLY

Due to restrictions and to follow all security measures, on November 20th, 2020, the Barcelona Language Exchange Online Bar was opened. The platform has “virtual tables” divided by languages ​​so that each attendee can choose. By opening the physical bars and lowering remote assistance, the online bar ended up closing.

But on June 4, 2022, Mojito Night was born, a Saturday night event in which, apart from practicing languages, we enjoyed the best mojitos in Barcelona at a discount.

THE LANGUAGE EXCHANGES ARE FUN, SOCIAL EVENTS WHERE ATTENDEES CAN ENJOY THEMSELVES, PRACTICE LANGUAGES AND MAKE NEW FRIENDS

Upon arrival, each person receives a sticker with their name, native language and the language they would like to practice or improve. With this now you can begin the exchange! The rules are simple: chat a bit in one language, then a bit in the other so every attendee has the opportunity to practice and speak. There is no minimum level required, the important thing is to put into practice the knowledge you already have, so you can improve. While the event is free, we would appreciate each person ordering at least one drink since the bar is allowing us to use the space.
I'M IN!

Mi name is:
I’m from:
I want to practice: